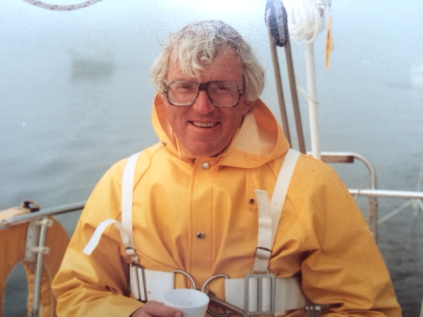 Jim Cooley   We are sad to report that long time Boyne Mountain patroller Jim Cooley, passed away on June 16th. He was recovering from surgery to remove a cancerous tumor from his lung when he developed a fatal infection.

Jim was born in Flint, Michigan in 1942. He Graduated from Fenton High School. He put himself through Albion College by working as a taxi driver on Mackinaw Island during the summer and as a paid patroller at Stowe and Aspen Buttermilk in the winter managing to get enough credits between summer and winter jobs to complete his degree in six years.

Jim was an avid skier and sailor. I first met him on Lake St. Clair where we raced Catalina Sailboats. Jim was an avid boater, racing in three to four weekly series races on Lake St Clair during the spring and fall each year. He earned Bay View Yacht Club’s “Old Goat” award for completing 25 Port Huron to Mackinaw sailboat races and was planning to earn a second “Old Goat” for completing his 25th Chicago to Mackinaw race this summer.

Jim was proud to be an integral part of the Boyne Mountain Ski Patrol for 45 years. He was active in on-hill and off-hill training programs and a regular participant in Northern Michigan Region functions throughout his patrol career. He was awarded National Appointment 5809 in 1981. He retired from active patrolling and transferred to Alumni Status in 2012.

Jim will be missed by all his patrol and sailing friends but we will all remember his optimistic, “can do” attitude and his unique style.