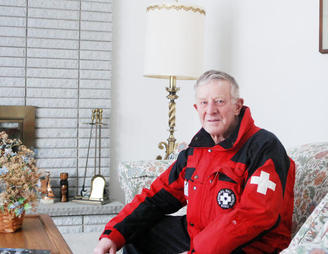 Karl joined the Ski Patrol at Mt Brighton in Eastern Michigan Region in 1964 and was first registered with NSP in 1966. He began skiing with the Boyne Highlands Patrol that same year and became a Boyne Highlands Assistant Patrol Director in 1968. He served in that capacity until his retirement from active patrolling in the spring of 2013. Karl was extremely active with Boyne Highlands and Northern Michigan Region serving in a variety of Patrol and Region functions.  His contributions to his patrol and region were recognized with National Appointment Number 5062 in 1977 and a Distinguished Service Award in 2001.

The Safety of the skiing public and his fellow patrollers was Karl’s first priority. He started every patrol day by riding every operating lift and skiing each open run looking for potential safety issues.  His commitment to safety was best illustrated in 2004 when Karl sat down while skiing on a very icy run to avoid running into a tree. He slid into a chunk of ice at the edge of the run breaking his ankle. He immediately called to warn everyone to stay off the run and to have it closed at the top. He then propelled himself, sliding on his bottom until off the run so no one had to ski the ice to come rescue him.

Karl’s concern for his fellow NSP members and the national organization was clearly demonstrated when he joined a handful of Central Division Patrollers in the fight to return member rights to the National Ski Patrol. Northern Michigan Region recognized his hard work and dedication to his fellow members with a Special Friend Award in 2007.

Karl patrolled nearly every day the resort was open, averaging 120 shifts per year until he retired from active patrolling at the end of the 2013 season. He continued his safety diligence in retirement by skiing every open run and riding every operating lift looking for hazards each of the 100 days he skied in the 2014 season.

Karl was surrounded by his daughter Lori and her husband Greg Watson, his son, and Mt Brighton Patroller, Brian and Brian’s wife Gina throughout his illness. He passed peacefully in his sleep early in the morning Friday June 13th with his beloved wife Micki at his side holding his hand